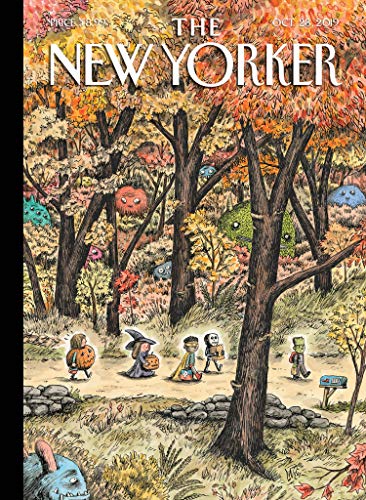 Week after week, The New Yorker keeps its reader current. Subscribe now and don’t miss the New Yorker’s famous fiction and poetry, book and film review, its incisive looks at politics, people and the way we live, and of course, those CARTOONS. In-depth reporting, surprising opinions, sharp wit, the best in prose, poetry, and the visual arts can all be yours for just $1 an issue!

Who Reads The New Yorker?
Several million readers a month who come to the magazine to be informed, surprised, moved, and amused.

What You Can Expect in Each Issue:
The New Yorker offers a signature mix of reporting and commentary on politics, international affairs, and the arts, along with fiction, poetry, humor, and cartoons.

Magazine Layout:
The New Yorker is a readers’ magazine. Articles range from short Talk of the Town pieces to long explorations of politics and world affairs, as well as notable figures in the arts, business, and science.

Comparisons to Other Magazines:
Since 1925, The New Yorker has published long-form journalism and short commentary that has changed the world and the way we think about it. Its essays and criticism are unparalleled.

Awards:
The New Yorker is the most-honored magazine in publishing history. Among many other honors, it has won 53 National Magazine Awards, more than any other publication in the organization’s history.

Amazon.com Review:
Founded in 1925, The New Yorker hardly changed for its first 60 years, both in its dry, type-heavy design and in its reputation as a writer’s and reader’s haven. In 1987 it was on only its second editor when management decided to shake things up. A rocky decade ensued, but The New Yorker is now back at the top of its game under David Remnick’s editorship. Each issue offers commentaries and reporting on politics, culture, and events, with a focus that’s both national and international; humor and cartoons; fiction and poetry; and reviews of books, movies, theater, music, art, and fashion. Several times a year special issues focus on a theme–music, fashion, business. The writing is mostly first-rate, frequently coming from top literary and journalistic talents. The New Yorker‘s weekly issues can seem overwhelming–so much good stuff to read, piling up so fast!–but it’s as easy to dip in for a small snack as it is to wade in for a substantial meal. –Nicholas H. Allison