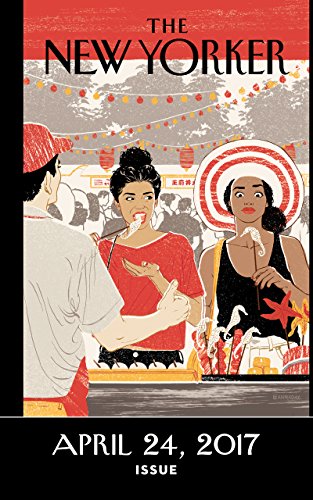 Enjoy a complete issue of the acclaimed weekly on your Kindle Fire each Monday–every story, every cartoon, everything in the print edition, and more. The New Yorker is a national weekly magazine that offers a signature mix of reporting and commentary on politics, foreign affairs, business, technology, popular culture, and the arts, along with humor, fiction, poetry, and cartoons. Founded in 1925, The New Yorker publishes the best writers of its time and has received more National Magazine Awards than any other magazine, for its groundbreaking reporting, authoritative analysis, and creative inspiration. The New Yorker takes readers beyond the weekly print magazine with the web, mobile, tablet, social media, and signature events. The New Yorker is at once a classic and at the leading edge.

This edition includes interactive experiences such as video, slideshows, and more. Plus, you can start reading within 60 seconds.

Kindle Magazines are fully downloaded onto your Kindle so you can read them even when you’re not wirelessly connected. Interactive content such as videos and slide shows are only available on: Kindle Fire 2nd Generation, Kindle Fire HD, Kindle Fire HDX.

A familiar illustration has often graced the cover throughout the past eighty-seven years. His name is Eustace Tilley, but he is no one of factual importance. The character was created specifically for the first cover and evolved into a mascot for the magazine. Eustace was based on the cartoonish image of Count d’Orsay found in the EncyclopÃ¦dia Britannica’s 11th edition.