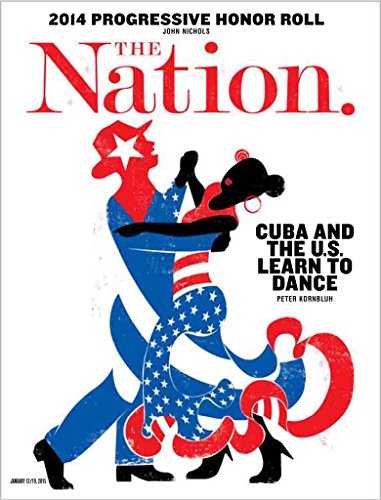 Founded in 1865, The Nation is America’s oldest weekly magazine, the flagship of the Left, and now the country’s most widely read journal of opinion. Published to inform the national debate on critical issues of the day, The Nation seeks to enlighten and empower a community of concerned citizens and influential readers.

The Nation has long served as an early-warning system, exposing prejudice, discrimination, and abuse of power through investigative reporting, analysis, commentary, and cultural reviews. Proudly independent of political parties and corporate interests, The Nation exposes, in print and online, issues often ignored by the mainstream media.

Championing civil liberties, human rights, economic justice, and peace, The Nation challenges the status quo, encourages dissent, and presents ideas from a variety of voices, always seeking a more tolerant and just future.America’s oldest continuously-published magazine, The Nation Magazine is devoted to politics and culture. Established in 1865, the publication has been providing readers with political information and causes throughout our country’s history. The magazine prides itself on the First Amendment right of freedom of speech and welcomes all points of view, including those different from the editors’ own.

In addition to current events pieces, The Nation Magazine features regular columns like Sister Citizen, Beneath the Radar, and Diary of a Mad Law Professor. The magazine has been a nonprofit organization since 1943 and tends to lean to the Left, although many different perspectives are shared. Inside each issue you will find a variety of views on different news affecting our nation.

From human interest pieces to political battles, The Nation Magazine covers all the events of the day. The pages of this magazine cover politics, world events, books, art, the economy, the environment, activism, and society. You can enjoy well-written articles on a wide variety of topics when you subscribe to this magazine, which is printed forty-seven times per year.

This publication currently has over 150,000 subscribers and is the self-described flagship of the Left. With the many issues facing our nation today, this magazine can provide perspective to make you a more informed citizen. The Nation Magazine continues to be at the forefront of political publishing, having endured three wars, two presidential assassinations, and many other trying times that have faced our country. Subscribe today to have this magazine delivered right to your door.