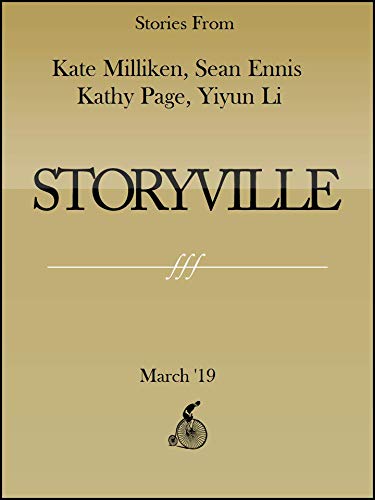 Storyville publishes four short stories each month to your Kindle.

Sarah Lyall, writing in The New York Times, said of the collection: Each story is a gem in itself. But the book is greater than its parts, an almost unbearably moving exploration of the importance of love, the pull of family, the uses and misuses of history, and the need to reclaim the
past by understanding who you really are and what really happened.”

“The Ninety-Fifth Percentile” is from John McManus’s new collection, FOX TOOTH HEART (Sarabande Books, 2015). Trevor Payne, writing in The Literary Review, said of the collections: In his new collection of stories, Fox Tooth Heart, John McManus puts his arm around our shoulder
and walks us out to the margin, calmly pointing out all the unfortunate souls who have stepped across the thin line. When he turns us away from the grotesque, toward the homes his characters can’t find their way back to, the familiar is dizzying in its sway.

“A Line in the Sand” is from Andres Neuman’s collection THE THINGS WE DON’T KNOW (Open Letter Books, 2015.) Neuman was included in Granta’s “Best of Young Spanish-Language Novelists” issue and is the author of numerous novels, short stories, essays, and poetry collections. His
novels have won the National Critics Prize, and have been longlisted for the 2013 Best Translated Book Award, and shortlisted for the 2013 Independent Foreign Fiction Prize and the 2014 International IMPAC Dublin Literary Award. Robert Bolano said of his work: “Readers will find
something that can be found only in great literature, the kind written by real poets, a literature that dares to venture into the dark with open eyes and that keeps its eyes open no matter what.”

“If It Were Anyone Else” is from Lincoln Michel’s collection, UPRIGHT BEASTS (Coffee House Press, 2015). Michel is the online editor of Electric Literature. His work has appeared
in Tin House,NOON, the Believer, American Short Fiction, Pushcart Prize XXXIX, and elsewhere. Sam Lipsyte says of his work: “Michel’s stories are strange, haunting, and often very funny beasts. His prose is rich and also spare. He can kill you in two pages or take you for a long, dangerous, kooky ride—and then kill you. And by kill you, I mean thrill
you. Savor this book.”