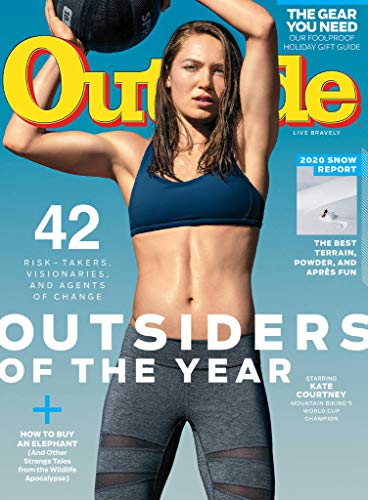 Outside covers the exciting, active lifestyle of today’s man.˜ Each month readers share the adventure, with travel reporting and advice available nowhere else, inspiring profiles, breathtaking photography, epic news from the frontiers of exploration and risk, rock-solid advice on gear, health and fitness and an addictive quotient of daring and mind-blowing surprises. Outside is a 2013 winner of the National Magazine award for General Excellence and is a 5 time winner of this prestigious honor.

Who Reads Outside Magazine?
Outside readers are passionately committed to leading an active lifestyle. Outside not only motivates readers to uncover and define their own personal day-to-day adventures, but also provides them with the tools, products and information to fulfill them.

Contributors:
The typical Outside contributor is a world-class journalist who bridges the worlds of high-caliber magazine writing and active participation in the outdoors. Our writers are in tune with great stories from every corner of the world, and they bring vigorous, fluid styles, wit, and unflappable reporting skills. Our regulars include Patrick Symmes, Ian Frazier, Hampton Sides, Wells Tower, Steven Rinella, Kevin Fedarko, and Bucky McMahon.

Magazine Layout:
Outside’s design is the visual synthesis of a three-decade tradition of literary journalism built on robust storytelling and inspiring service journalism. The layout and typography reflect and enhance the verve and excellence of the magazine’s reporting and photography.

Comparisons to Other Magazines:
For 31 years, Outside has set itself apart through its comprehensive, award-winning coverage of travel, sports, adventure, health and fitness, the environment, and the personalities, style, and culture of the world Outside. None of its competitors offers the scale of coverage that it does, or the same level of quality.

Awards:
Outside has won numerous awards for excellence in journalism, photography and design. Chief among its many accolades, Outside is the only magazine to receive three consecutive National Magazine Awards for General Excellence.