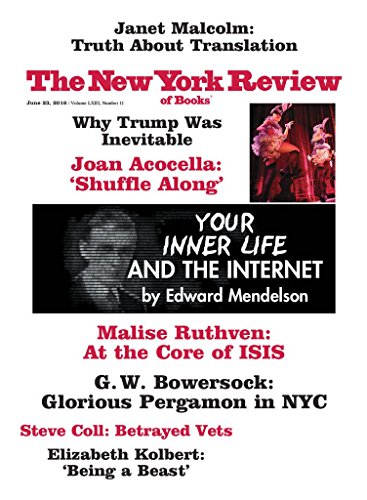 The New York Review of Books has served as a forum for writers and thinkers to discuss not only current books but also the provocative and complex issues of American culture, society, economics, politics, and the arts.If all book reviews aspire to the condition of magazines, the New York Review would represent the best realization of this aspiration to date. It retains the character of a book review, published 20 times a year. But since its inception over 30 years ago, the reviews have been long, dense (recent years have brought the practice of footnotes), and learned. Significant fiction is pondered, along with bits of poetry, slices of science, and gobs of political science, history, economics, biography, art, and music. The reader of the New York Review easily feels relieved of the cultural burden of having to read a book once having completed the sufficient burden of having read a thorough review of it. Although the impeccably left-leaning editors would be loathe to agree, only major figures or discourses in the European intellectual tradition need apply to their pages for consideration. Hence, for example, although occasional “pieces” on certain worthy movies now appear, popular culture is not a serious concern. Lately, the Review has given over more of its pages (from 60 to 80 each issue) to journalistic reports–the latest political currents in China or Russia, the state of affairs in Kurdistan or at Camp X-Ray in Guantanamo Bay. Its core identity remains, however, that of a magazine unequaled for addressing intellectual “issues”–Darwin under attack again, pedophilia continuing in the Church, whither globalization–through reviewing them as these issues appear in book form. –Terry Caesar