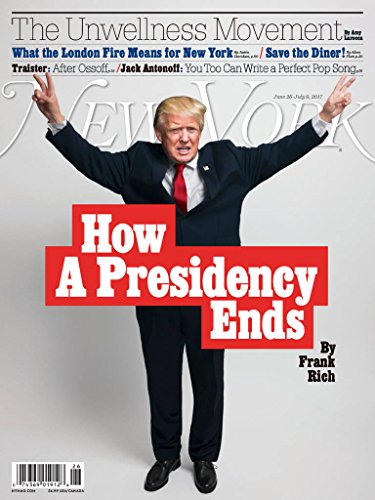 CULTURE, POLITICS, FOOD, FASHION: A NEW YORK POINT OF VIEW. With assertive reporting and sophisticated design, New York chronicles the people and events that shape the city that shapes the world.

The Kindle Edition of this magazine includes Page View. In Page View, your magazines look just like the printed edition with all the photos and formatting.

New York is eagerly awaited by readers seeking the energy and excitement of the city itself in a magazine with smart writing, beautiful photography and sophisticated design. New York’s audience of more than 2.4 million readers each week reaches far beyond its namesake city. Readers come to the magazine for the latest news and social trends, to explore the city’s cultural happenings, and for a navigational tool for all aspects of city life.

Intelligencer: Look for columns from New York’s all-star roster of writers, including Andrew Sullivan, Jonathan Chait, Heather Havrilesky, Amy Larocca, Will Leitch, Mark Harris, and others, along with mini-profiles of the day’s newsmakers and celebrities, and inventive visual features.

Strategist: The magazine’s Strategist section is devoted to telling the reader what to know in order to enjoy urban life to the fullest with the latest in shopping, dining, real estate, travel, and more. Strategist constantly provides fresh information and thoughtful, useful direction on how to live in New York, whether you’re a local or simply an enthusiastic fan.

The Culture Pages: The goal of New York’s “Culture Pages” section is to report on, reflect, and critique culture in a city that is bursting at the seams with it. At the section’s core are some of the best critics in the business—from Jerry Saltz on art to David Edelstein on the movies to Christian Lorentzen on books to Justin Davidson on classical music and architecture—who bring pointed, impassioned, and extremely knowing voices to bear on their respective fields.

Features: New York’s feature stories chronicle the ideas, people, and cultural currents that are forever reshaping both the city and the larger world it inhabits, chronicling a broad range of topics–from politics to social trends, fashion to finance.

Magazine Layout: New York’s visuals—its stunning photography, ingenious infographics and illustration, and a design that manages to be both fresh and familiar—are equal partners with its words. The magazine insists that it is possible to be brainy and beautiful, serious and playful, at the same time.