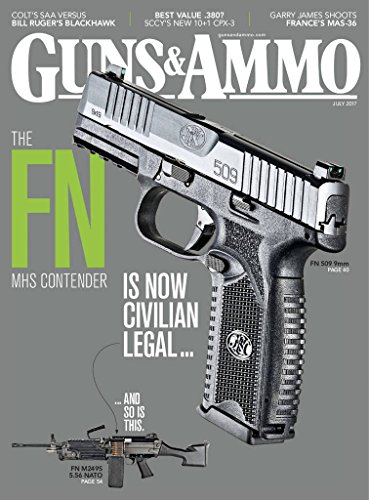 Guns & Ammo spotlights the latest, greatest models, from combat pistols to magnum rifles…reviews shooting tactics, from stance to sighting…and explores issues from government policies to sportsmen’s rights. It’s the one magazine that brings you all aspects of the world of guns.

Guns & Ammo is currently published with a frequency of 12 issues per year, once per month. Publication schedule is subject to change without notice.

Kindle Magazines are fully downloaded onto your Kindle so you can read them even when you’re not wirelessly connected.Guns & Ammo magazine is one of fifteen outdoors magazines published by Intermedia Outdoors Inc. and provides an overall view of the shooting industry for the consumer. It is one of the leading sources of information on new handguns, shotguns, rifles, and ammo. In addition, current legislative details and trends that impact the shooting sports and self-defense markets are documented.

Specific categories are covered in depth, from personal defense to the military and law enforcement. Guns & Ammo magazine takes the reader to the forefront of current controversies with thoughtful, concise information. Not sure which long-range cartridge is the best? Need tips on reloading your 12-gauge and 28-gauge shotgun shells? Want an insider’s view on how to buy used guns from pawnshops? Guns & Ammo magazine presents the answers you want and need.

Enjoy the unique historical content offered in each issue as well. From the eight most influential people in shooting history to the best military handgun to the history of the $300,000 Winchester rifle owned by the king of Spain, you learn about shooting history from a new perspective.

Guns & Ammo magazine caters to both the professional and the casual shooting enthusiast with commentary from experts in the fields of competitive shooting, ammo reloading, hunting, personal defense, and the military.

For both the amateur and serious shooting enthusiast, a subscription to Guns & Ammo magazine delivers. There is no better source of information available in today’s modern weapons marketplace.