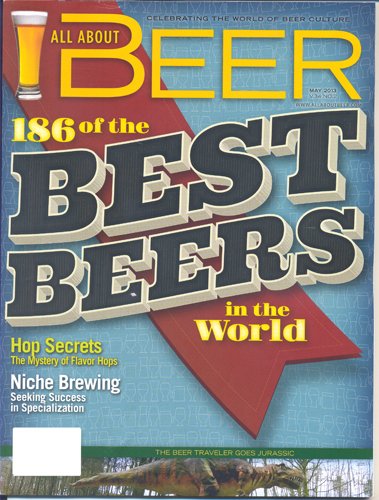 All About Beer magazine, which has been voted the “Best Beer Publication” 7 years in a row, entertains and educates beer lovers. Featuring the history and variety of beer. Including methods & traditions of beer making, and the political & social environment that affects the pursuit of beer pleasure.All About Beer Magazine

To learn more about beer-making, beer history, beer politics, and even new trends in beer tasting, pick up a subscription to All About Beer Magazine. Each issue is designed to help beer lovers and people in the industry keep up with all things brew related.

Get the lowdown on the history of hops, the plight of early beer crafters, and the amazing stories that led to some of today’s most beloved brands in All About Beer Magazine. Each issue has a historical piece to educate and amaze beer enthusiasts. Many articles even give a bit of insight into the evolution of the craft.

Learn the ins and outs of the industry in All About Beer Magazine. The articles cover the intricate details of distribution, crafting, and development that affect everyone who makes and drinks the brew. The magazine also outlines the differences in types and styles of beer.

Interested in learning how beer is holding its own in other parts of the world? Pick up a copy of All About Beer Magazine, where you can find articles on the international state of the brew in addition to the issues that affect the bottle in your hand.

All About Beer Magazine doesn’t stop at just beer. It also provides tips and tricks on related issues such as hangovers, homebrewing, and the future of American beverages.

A subscription to All About Beer Magazine will expand your horizons on the topic of your favorite beverages while giving industry professionals everything they need to stay on top of the craft.